Well through that happened in January I was held at the hostpital for an extremely long period of time.

This just came to me that February is half way over and I even forgot to give Marcy a valentine gift.  Well anyways the hostipal was fine.  The food was okey and I got to catch up on News.  Through I feel sad for missing work.  I still have my job, but I feel like a potatoe just sitting there when I'm perfectly healthy.

The doctors asked a lot of questions along with the feds.  Most of them I just said "I don't know".  Still after a week they let me go.  It just feels odd now.  Just like the world is different. Just a tad different.
Posted by Micheal Dennis at 2:44 PM No comments:

I was sleeping or rather staring at the wall.  It seemed like hours trying to get to sleep and funny enough when I'm about to get some sleep I hear something.  I've been getting really paranoid sense waking up in the marsh that day.  The hole in my arm was about heal.  So I just stay still waiting for another sound.  I wait and then another sound.  Something's in the room.  Now I'm petrified ,heart beating, sweating and all the stuff.  I straighten up through and decide to do what my mind doesn't want.  I quickly jump out of my bed and onto my feet.  Two figures in the room, one to the right just watching and the other right in front of me holding something.  I strike first swing a fist into the guy's face.  He drops what he was holding, another needle.

I push the guy and he hits back reaching for my throat.  I'm not much of a fighter and I haven't been going to the gym lately.  Luckily this guy wasn't in top fitness either.
I grabbed him and slammed him to the wall ,yet a pain hits my right arm.  I didn't notice the other guy coming over.  It was too late through I just swung a weak one and fell back.  Some how the pitch black I was fighting in became even more darker.


I woke in a giant room.  The walls were covered in markings and some sort of fire pit was in the center.  More guys were around and it was better lit by a bunch of candles.  Masks all of them had masks like the ones I saw before.

My hands were tied behind my back and one of them was holding me by my neck ,pushing my head down.  One with a robe of some sort came out and started to speak in latin.  I couldn't understand him and after a minute they all just stood there waiting for something.  I closed my eyes hoping that it was a dream,yet I knew it wasn't.  When I opened them again I saw a new man standing near the leader who was now kneeling with his head turned down.  I couldn't see the man's face because of the other stooge holding me down.  He looked well dress for being with these guys and started near me. .  About a foot away and he frozed.  I was on my knees, still my head forced down. It seemed like an eternity.  Suddenly I felt the man release me and I could look up.

Before I could a burst came out of know where, my sight just whiteness all over.  Sounds of gun fire filled the place.  I fell to my side and as my vision cleared.  It seemed that the FBI was keeping tags on me after my first abduction.  They were lucky on this one through.  Seemed that it was the last night they where going to steak out the apartments. Thank God.

Either way all the cultists either died or was arrested.  Yet when I told them about the man in the suit they said he wasn't there.  He must of made a quick exit and some how got out.

Well I doubt I'll ever see him again.

God bless
Posted by Micheal Dennis at 3:11 PM No comments:

A long time ago

I am back.  Been bout a month and then some sense I came to this stupid thing.  I have so much to tell.
First off ,after I got back from D.C things were going well.  I decided to stop this blog since I started drifting off with other things.  Now I've just been released from a hospital that I've stayed for a week. I thank God that the FBI got to me in time.  I need to go for now. Got to get some groceries.
Posted by Micheal Dennis at 12:45 PM No comments:

Well , I've been busy for awhile.  I hope whoever reads this had a good christmas.  I drove to D.C and spent time with some family.  Nothing crazy has happened to me yet.  Through I could swear on my drive back I saw one of those masked guys that kidnap me.  Thinking about it I must be taking it well for being kidnapped and used in some cultist ritual.  I just hope the new year will bring better times.  Well God bless and good night.
Posted by Micheal Dennis at 1:39 PM No comments:

Well I got a call from the doctor who treated me.  He saided that he was right.  Some Anaesthetic was used on me.  Nothing from police about anything.  Marcy came by today.  Rich told her about it.  He jokes of me almost becoming a "human sacrifice".  I feel better through.  Work was fine today, pretty slow.  I bought presents today for my nephews and mailed them off.  Dad and Mom are having a grand time in California, not much else.  I looked up those words.  Is plumbum means "He leads" and Is Grows means "He Grows" (never would of figured that one out). I haven't found much about any groups that do things like this or tleast are rumored to commit these acts.

The symbol is omega with a V in it.  Not sure what that means.  Anyways I need to go.  The cough seems to be getting worse.  Tomorrow I'm going to get some meds to help.  God bless who ever is here.
Posted by Micheal Dennis at 5:36 PM No comments:

The moon is red and there is blood on my head.

I just don't know where to start.  I mean so much has happened since last night.  It all started during the poker game.  One of the guys reminded me of the Total eclipse was happening tonight.  After a few hands and me raking in the chips I decided to leave early.  I was going to get some rest and then wake up and look at the moon.  I enjoy astronomy and so this was a pretty once in a life time moment.  That moment never came, or I don't remember.  I got into bed and the alarm was set for 3am.  I fade into sleep and I start having a dream.  I was in small dirt field in surrounded by a marsh laying on my back.  Their were torches around me and it felt so real. I heard whispers behind me and move my head to see several (I think three) people wearing plain masks except for eye holes which had black paint around it.

After seening them the dream went black.  My eyes open and you know where I am?  In a dirt field surround by marsh in the middle on nowhere.  I look around.  Its cold and I'm shirtless my jeans which I wore to bed were torn up at the knees.  Then I notice whats on me.  All over me are scribbles and words in red and black paint.  Then as I tried to sit up I feel a sting in my arm.  Looking over at my right arm is a precise whole up near my shoulder.  I was freaking out.  I stood up looking all around.  Nothing, the sun was shining through clouds were gathering .  Luckily I spot a road a long way away.  I could hardly see the cars.  The other way led into a swamp filled with trees and vines.  I moved 2 miles in needle and saw grass before I reached the lone road.  I looked like something out of a horror movie.  My legs had cuts and my upper torso had scribbles all over.  About five cars passed before a driver took the risk and pulled over.  The nice elderly couple drove me to the closest hospital.  I was miles away from Norfolk right near the Dismal swamp (The dismal swamp is an extremely large marsh area in south east Virginia).  Right as I walked in to see the doctor.  A few bruises and cuts ,but nothing serious.  Then I pointed out the hole and he said It must be from a syringe (Isn't that Great!).  With my blood and urine sample he'll send the information what I was injected with.  Seeing that I was healthy other than the unknown chemical that ran threw my veins.  I talked with some police, and told them what I know which isn't much.  They just wrote stuff down and said they'll get right on it.
Through they have no idea who did this and neither do I.

I got a ride back to my apartment after calling work saying that I what happen and my boss gave me leave.  The apartment was normal except the door was unlocked.  So right after I got back I bought a nice dead bolt and placed it in.  I don't know any else to do except just lock the door and pray that it won't happen again.  I mean this must be some stupid kids playing games through they wouldn't go so far as to inject me with whatever I was injected with.  The doc assured me that it was probably a knock out drug.  Explains how I don't remember anything other than when I woke up right during their ceremony which lasted only 10 seconds.  I was watching TV later today and they were talking about how some wicken groups were doing little rituals for the Total eclipse.  I must've of been apart of some fringe group of pagans or something.  I hope the cops find who ever did this cause if I find out and they're not behind bars there is going to be hell to pay. 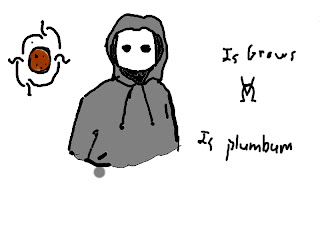 I did some doodling and came up with what was written on me.  I also threw what the people looked like.  It took a minute and I'm no artist.  I know that its latin and for a minute I thought that circle was a cookie. I think its the moon during the eclipse.  I need to go.  I feel horribly tired and being out in the cold has given me a bad cough.  Bless who ever reads this.
Posted by Micheal Dennis at 1:12 PM No comments:

well I won't be home till late.  Lots are coming in for football and dinner,  Wings night also,  My boss/owner of this fine establishment is hosting a poker game after we close up shop.  Me and several other employees are staying late.  Last time I won so my hopes are up.  Give me luck,
Posted by Micheal Dennis at 3:35 PM No comments: